This site uses cookies to deliver a better experience.

A Balfour Beatty Costain joint venture were awarded a £208 million package in 2016 to upgrade a section of motorway between junction 8 M60 and junction 20 M62. The upgrade involved using the hard shoulder as a running lane and using variable speed limits to control the flow of traffic. 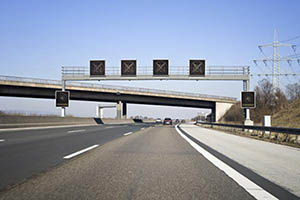 They subsequently approved PRO V500 injection resin with Proventure M24x480mm A4-316 V anchor rods. Lighting column brackets have now been installed on 56 overhead gantries. 40% of the anchors were tested to a tension load of 30kN. All anchors tested held at 30kN. 6no anchors were tested to failure and held at 145kN, the limit of the test meter used.